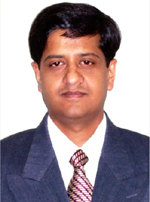 Ravi Goyal received his Ph.D. in pharmacology from the University of Mississippi and MD from Armed Forces Medical College, India. He completed his post-doctoral fellowship at Loma Linda University.

The major approaches the group use to investigate angiogenesis, stem cell differentiation, and development of targeted cancer therapeutics are aimed at the identification of the novel transcripts including long non-coding RNA involved in these processes. These transcriptomic regions are then examined with contemporary bioinformatic methods to identify conserved regions in the mouse, sheep, and human genome. Following identification of the conserved region, we use the CRISPR technique to knockdown or activate these regions to determine their functional implications. We hope to identify molecular targets by which we can increase or decrease angiogenesis, improve stem cells differentiation efficiency and provide a targeted approach to kill cancer cells.

The significant contribution of Goyal’s group is providing evidence that balanced nutrition and optimal oxygenation is vital for a healthier life of the offspring and prevention of diseases in adult life. Specifically, the group has demonstrated that despite adequate calories, protein malnutrition during pregnancy can lead to lifelong consequences in the offspring. Furthermore, they have shown that this programming occurs at the epigenetic level and can be inheritable. Other contributions include hypoxia-mediated alterations of gene expression in arterial contractility and angiogenesis. Currently, the group is investigating the role of long non-coding RNA on angiogenesis and vascular development. Dr. Goyal’s lab group has published several peer-reviewed original research articles, reviews, and book chapters on cardiovascular and cerebrovascular changes in response to maternal stress.