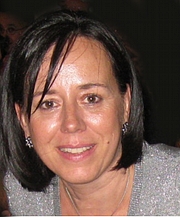 Dr. Stock earned her B.S. in Biology (emphasis in Zoology) and her Ph.D. in Natural Sciences (emphasis in Parasitology and Nematology) at the Universidad Nacional de La Plata, Argentina. After completion of her degree, she joined the Center for Parasites and Vector Studies (CEPAVE, Univ. of La Plata) and soon after held a teaching faculty position at the Dept. of Zoology, Universidad Nacional de La Plata. She held a position as a visiting scientist at the University of California, Davis, where she continued her research on entomopathogenic nematodes in Harry Kaya’s laboratory. In 1997, she accepted a NSF-funded post-doctoral position with Steve Nadler at UC-Davis to study free-living cephalobid nematodes integrating classical and molecular phylogenetics.  In 1998, Dr. Stock was hired as Senior Museum Scientist (Assistant Curator) of the U.C. Davis Nematode Collection.  Besides her curatorial responsibilities, Dr. Stock remained active in research collaborating in several research projects with colleagues from the USA, Europe, Asia, Africa and Latin America.  Since 2001, Dr. Stock has been at the University of Arizona. Currently, she is the Director of the School of Animal and Comparative Biomedical Sceinces where she also helds her Professor appointment. She is Joint Professor in the Department of Entomology and is a Professor in the Honors College.

Her research program focuses on the study of insect pathogens as model systems. Specifically, the focus is on entomopathogenic nematodes (aka EPN) Steinernema and Heterorhabditis spp. Nematoda:Steinernematidae, Heterorhabditidae) and their bacterial symbionts  Xenorhabdus and Photorhabdus spp (Enterobacteriaceae) which represent an emerging model of terrestrial animal-microbe interactions.EPN symbiotic bacteria also represent a new and rich source of novel bioactive molecules with insecticidal, nematicidal, antibiotic, and antimycotic properties. In this respect, her laboratory is involved in the discovery and characterization secondary metabolites of a newly discovered Photorhabdus bacterium that is native to SW USA. We also investigate eukaryote-prokaryote mutualisms as models for understanding trophic complexities and interactions in food webs. A continued research focus is nematode biodiversity. Over her career, Dr. Stock has been  actively engaged in survey and inventory projects in different geographic regions of the world with the overarching goal of understanding the ecology and behavior of these entomopathogens but also to develop them as effective biological control agents against major agricultural and urban pests. She has authored and co-authored over 120 refereed papers, eleven chapters in books regarding systematics, biology of insect-parasitic and free-living nematodes. She was the senior editor of the book “Insect Pathogens:  Molecular Approaches and Techniques, published by CABI  Publishing.