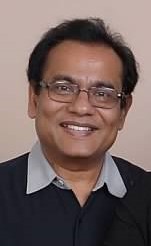 Professor Tribikram Kundu received his bachelor degree in Mechanical Engineering from the Indian Institute of Technology, Kharagpur in 1979.  His MS and PhD were from the Department of Mechanics and Structures at the University of California, Los Angeles in 1980 and 1983, respectively. He joined the Department of Civil Engineering and Engineering Mechanics of the University of Arizona as an Assistant Professor in August 1983 and was promoted to full professor in August 1994.

Dr. Kundu has made significant and original contributions in both basic and applied research in nondestructive testing (NDT) and structural health monitoring (SHM) by ultrasonic and electromagnetic techniques.  His fundamental research interests are in the analysis of elastic and electromagnetic wave propagation in multi-layered solids, fracture mechanics, biomechanics and computational mechanics.  Application areas of his research findings include civil and structural materials, aerospace materials, geomaterials, electronic and biological materials.  He has published 7 books (2 text books and 5 research monographs), 15 book chapters and 331 technical papers, 166 of these papers have been published in refereed scientific journals. As of April 2, 2018, according to Google Scholar (http://scholar.google.com/citations?user=zKRoHmwAAAAJ&hl=en) his publications have been cited 6012 times with an h-index of 41 (i.e. at least 41 of his publications have been cited 41 times or more) and i10-index is 139 (i.e. 139 of his papers have been cited 10 times or more). According to Web of Science his h-index and citation numbers are 27 and 2671, respectively, as of February 24, 2018. He has also edited 22 conference proceedings, supervised 38 PhD students [33 at the University of Arizona (9 jointly) and 5 in foreign universities] and 27 MS students [26 at the University of Arizona (2 jointly) and 1 in a foreign university]. Currently he is supervising 1 MS and 4 PhD students (1 jointly in a foreign university).  He is Fellow of five societies - ASME (American Society of Mechanical Engineers), ASCE (American Society of Civil Engineers), ASA (Acoustical Society of America), ASNT (American Society of Nondestructive Testing) and SPIE (The International Society for Optics and Photonics) - and a life member of AvHAA (Alexander von Humboldt Association of America).  He is the Chairman of the SPIE yearly conference on Health Monitoring of Structural and Biological Systems (held in March of every year).  He has served as the Chairman of the ASME NDE Engineering Division from 2003 to 2005.

He is the founding Editor-in-Chief of the ASME Journal of Nondestructive Evaluation, Diagnostics and Prognostics of Engineering Systems (http://nondestructive.asmedigitalcollection.asme.org/journal.aspx?journalid=188, serving as EIC since April 2017). He was also the founding Editor-in-Chief of the Journal of Civil Engineering and Science (served as EIC from 2012 to 2017). He is currently serving as an Associate Editor (AE) of Ultrasonics since 2014 and has served as an AE of the Journal of the Acoustical Society of America (2012-2017), ASME Journal of Pressure Vessel Technology (2006-2012) and Structural Health Monitoring: An International Journal (2008-2017). He had served on the editorial advisory board of the International Journal of Geomechanics (2001-2006) and Structural Longevity journal (2009-2017). He has extensive collaborations with international and US scientists.   He has spent 30 months in the Department of Biology, J. W. Goethe University and Frankfurt University of Applied Science, in Frankfurt, Germany, first as an Alexander von Humboldt Fellow and then as a Humboldt Research Prize winner.  He has also spent minimum one month to several years in each of the following institutes as an Invited Professor

-          Laboratory of Mechanics and Physics, University of Bordeaux, France

Dr. Kundu has received a number of recognitions; some of those are listed below.

-          ASME NDPD Division’s Founders Award 2017 – Presented at the IMECE (International Mechanical Engineering Congress and Exposition) 2017, in Tampa, Florida, Nov. 4-6, 2017. This award is given by the NDPD (Nondestructive evaluation, Diagnosis and Prognosis Division) based on the nominee’s publication impact. The award citation states “In testimony of his significant and original contributions in both basic and applied research in nondestructive testing (NDT) and structural health monitoring (SHM) by ultrasonic and electromagnetic techniques that include fundamental research in the analysis of elastic and electromagnetic wave propagation in multilayered solids, and its applications in civil, structural, aerospace, geological, electronic and biological materials.”

(the award certificate was given in March 2012 at the SPIE’s annual symposium on Smart Structures/NDE).

-          2015 Research Award for Sustained Excellence from ASNT (The American Society for Nondestructive Testing) in recognition of his outstanding and sustained contributions in NDE/NDT (the award was given on March 18, 2015 at the ASNT’s research symposium in Anaheim, California)

-          Research paper recognized as among top 1% of acoustic papers: The paper “Acoustic Source Localization in Anisotropic Plates”, co-authored by Kundu, Nakatani and Takeda and published in Ultrasonics Vol. 52(6), pp. 740-746, earned a rank 132 among 20,857 acoustic papers (including medical acoustics), published in all journals during the period 2010 to 2014. In other words, this paper was rated among top 1% papers in acoustics for its citations. This recognition was made in 2017 based on the analysis done in 2016 and 2017.   https://docs.google.com/spreadsheets/d/1Wi60rKzhXzw_grnxEtgQpeP9tRFXZ_48ll17BoLGqhA/edit?usp=sharing is the link to the table listing top 500 papers in acoustics.

-          Plenary and Keynote talks in a number of conferences and workshops

-          Certificate of Appreciation from ASME Pressure Vessels and Piping (PVP) Division in ‘Deep Appreciation for His Valued Service in Advancing the Engineering Profession’, presented at the Honors and Awards Luncheon of PVP Conference in Toronto, Canada, July 18, 2012

-          UCLA Alumni Award - Outstanding Graduate Student of the year in the College of Engineering, 1981

-          President of India Gold Medal (PGM) for ranking first among all graduating engineers from I.I.T. Kharagpur in 1979

Professor Kundu has taught a variety of courses on mechanics and numerical methods. These include undergraduate courses on Statics, Dynamics, Strength of Material, Numerical Analysis with MATLAB, Structural Analysis, and Finite Element Method. At the graduate level he has taught courses on Continuum Mechanics, Elasticity, Plasticity, Advanced Finite Element Analysis, Fracture Mechanics and Elastic Wave Propagation in Solids. He has developed the last three graduate courses at the University of Arizona and thoroughly revised the first three. He has authored a textbook on fracture mechanics that also includes elasticity theory in its first chapter, co-authored a textbook on Introductory Finite Element Method and edited a book on Ultrasonic Nondestructive Evaluation that can be used as a textbook for a graduate level course on elastic waves. He has supervised 22 MS students (2 jointly), 34 PhD students (9 jointly and 3 in Foreign Institutes), and 7 post-doctoral research scholars. He is currently supervising 2 MS and 4 PhD (1 jointly) students. In 1999 his MS student (Y.C. Jung) received the best MS thesis award at the University of Arizona. Only one MS thesis was selected for this award in 1999 among all fields of science, engineering and humanities. In three consecutive years 2000, 2001 and 2002 his PhD student C. M. Dao received the Bill Gates Millennium scholarship and was selected for the Outstanding Graduate Student of the CEEM (Civil Engineering & Engineering Mechanics) Department in 2007. His PhD students Samik Das and Ehsan Kabiri Rahani also received the Outstanding Graduate Student of the CEEM Department award in 2008 and 2011, respectively. In 2009 he received the outstanding faculty award for his teaching, selected by the undergraduate students of the CEEM department. In the year 2000 Dr. Kundu received a Letter of Commendation from the Graduate College of the University of Arizona for his contributions in graduate teaching, research and mentoring activities. In May 2002 he received a special recognition as the Outstanding Honors Faculty, awarded by the University of Arizona and the Honors College for his ‘outstanding and dedicated service in guiding undergraduate students of the Honors College’. His former graduate students are now faculty members in USA (University of South Carolina, California State University at Northridge, North Carolina State University and State University of New York at Buffalo), and abroad - South Korea, India, Brazil, Qatar and Turkey.

Dr. Kundu has made significant and original contributions in both basic and applied research in structural health monitoring (SHM) and nondestructive testing techniques (NDT) for material characterization by ultrasonic and electromagnetic waves. His research interests include acoustic microscopy, elastic wave propagation in multilayered solids, fracture mechanics, computational mechanics, and numerical modeling. Application areas of his research findings can be in aerospace materials, civil and structural materials, geomaterials, electronic as well as biological materials. His research on biological material characterization has also received international acclaim. He has won the Humboldt research prize (also known as the Senior Scientist Award) from Germany for his research on biological cell characterization. He has developed a new mesh-free semi-analytical/numerical technique called distributed point source method (DPSM) in collaboration with his French colleagues. This technique has been found to be superior to the finite element method (FEM) for solving many ultrasonic, electrostatic and electro-magnetic problems. He has co-authored the first book on DPSM.Dr. Kundu has collaborated with European scientists on theoretical and experimental research on engineering and biological materials. Most of his European collaborations have been funded by foreign funding agencies in Germany (Alexander von Humboldt Foundation), Belgium (NATO, North Atlantic Treaty Organization), France (French Ministry of Education), Denmark (Aarhus University Medical School), Spain, Poland, Sweden, Switzerland, Japan, South Korea, India and China. Among domestic sources, the National Science Foundation and the Air Force Office of Scientific Research have provided the lion share of his research funding. Besides Humboldt Research Prize he has won the NDE Life Time Achievement Award from SPIE and Research Award for Sustained Excellence from ASNT for his research contributions.